The clear sky we went to bed under had been replaced by overcast, but it burned off quickly. 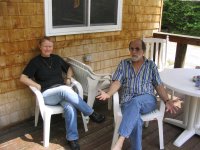 Sandy and I met Jerry Gagnon in 1978. We had been planning an assault on Mt. Washington when the rear brake went out on our GL-1000. He was the first rider we met when asking how to find a shop, and he had a friend with a garage and the necessary equipment. A simple bleeding and the brakes were fine, but Jerry took us in and insisted we stay at his camp up on Cedar Pond. A few years later, Jerry came up and visited us in Sudbury on his GoldWing. We fell out of touch over the years, but have reconnected since NEVROC have brought us back to the area in recent years.

We arrived at Jerry’s new camp on Cedar Pond early. He made a fine breakfast and we sat on the deck catching up while we watched and assortment of squirrels fight over the bird feeders. This is as entertaining as watching Doris and the ducklings. 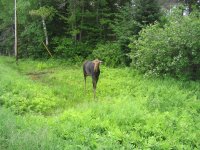 Jerry took us for a drive up Highway 16 to Errol in search of the NH moose. The road would be very nice if the surface wasn’t so rough. Apparently 90% of the residents opposed improving the road because they wanted to discourage tourists. On the way back from Errol, we saw a cow moose on the side of the road. Jerry stopped and I got out for a picture. As I walked towards her, she looked up and started walking towards me. I stopped and she stopped. I took another step and so did she. Before we could get this resolved (we were still about 15 feet apart), a pickup truck with a barking dog in the back spooked her and she headed into the bush. 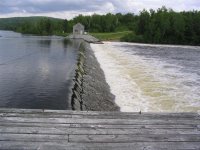 Highway 16 runs along the Androscoggin River, which flows from Errol down past Milan to Berlin. There are a series of small hydro dams along the way. As with the Connecticut, the river is very high and they have been taking logs out of the dams. In a few places, the water level is not far from the road. This photo is the Pontook Dam between Berlin and Errol.

Later, we went over to West Milan for soft serve ice cream. The graveyard next to the general store has headstones going back to the mid-1800’s. Then we took a drive around Cedar Pond. The road is two miles and is lined with camps. People from “down state” and furriners from Massachusetts have pushed the price of a simple camp up here into the quarter million dollar range.