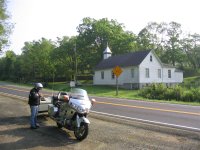 It was a fine morning. We headed south out of Wytheville on Highway 21, once again finding a very nice road away from the hustle and bustle of the Interstate. We wound our way through rolling hills, stopping once in a little pullout so Sandy could put on warmer gear. This was a pleasant break after the oppressive heat of the last few days. Before long we crossed into North Carolina and turned west on 221.

While 221 was a bit more twisty than 21, it was still a great ride. There were no significant towns nearby, but many of the houses were relatively new and well maintained. It had a definite middle class air and I couldn’t help but wonder where these people worked. Eventually we arrived in West Jefferson, a community that looks like it is growing by leaps and bounds. We grabbed the usual breakfast at Mickey’s.

A little further down 221 we came to the Blue Ridge Parkway at Deep Gap. Everything around here has “gap” in the name, the same as things out west use “pass”. But there seem to be a lot more of them. We got on the Parkway and headed south. This is a pleasant road that winds along the ridge. Its curves are gradual and the speed limit is 45 MPH. We cruised along at about 80 KPH enjoying the scenery. Traffic was light and nobody seemed to be in a hurry.

Before too long, we came to the spot where the parkway was closed due to a massive slide. They tell me that this was triggered by a hurricane and no one is sure when or if it will ever be repaired. The detour is back on our old friend 221. By this time, 221 (known in this stretch as the Blowing Rock Road) had gotten quite severe with many very sharp curves. It looked like time for gas (which you have to plan for on the BRP) so, when the detour led back to the Parkway, we stayed on 221. I am pleased to say that, in a bout of spirited riding, no one was held up by me while I ended up behind an SUV that was moving slower than I was. After about 30 miles, we passed the entrance to Grandfather Mountain. This looked interesting and we’ll look it up when we are back here.

Just a word on this part of the trip. Many riders ride the Parkway through here but anybody looking for a challenging ride should consider 221 as an alternative. It won’t be about the scenery but it will be about the road. 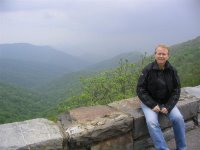 We got gas in Linville. The girl at the station told me that the next Parkway entrance was a few miles down the road. A Harley Rider from Upstate NY asked if he could follow us to find the entrance. We found it and climbed back up for more relaxed cruising. We made several stops at the lookouts and one at the Visitor’s Center. The sun had given way to some rain clouds but it only sprinkled. When we finally reached Asheville, we elected to pick up the pace to KSL and climbed onto I-40 West. Off at the Waynesville exit, Highway 74 AKA the Great Smokey Mountain Parkway is starting to seem like an old friend. Past Bryson City we fueled up and turned 28 for the last few miles to KSL. 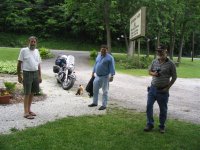 Slammer and his friend Tobey from NC were already here as was Lugnut and his wife and Stewey from Indiana. While we were getting set up, a VN 2000 pulled in loaded like the Clampetts moving to Beverly Hills. There was a familiar smiling face, one we never expected to see here. Coyote had arrived from Texas. The photo shows Fred, Coyote and Slammer at the entrance. John is exploring the new freedom of the recently retired. Chunk from Wisconsin, towing his camper behind a Concours, arrived soon after. Chunk and I always compete for the flattest camping spot and, this time, I won.

After set-up and a refreshing shower, we settled back to catch up with old and new friends. Chuckster1 from Jackson Michigan arrived with two friends. One, on a BMW “Cruiser”, turned out to be from near Brantford Ontario and grew up in Alban, just south of Sudbury.

Fred and Mo served bratwurst with a concoction of onions, peppers and other things along with potato salad. A light rain started falling but it didn’t dampen anyone’s spirits. Everyone ate and then told tall tales until we started wandering off to bed one by one.
Posted by Jim "Skid" Robinson on 6/01/2006