Today we had a dilemma. Laconia NH is the next stop. We have about 240 miles to cover and four days to get there. Gord and Shirley were headed for Pennsylvania. Ray had laft early for Sudbury.

We loaded our respective vehicles and headed out. At Exit 20, we got off I-87 and took 149 east. For the second day in a row, I missed a turn and, instead of taking Highway 30 through Vermont, we went straight south on Highway 22. I finally checked the map and found the GPS was looking better and better. But, same as yesterday, all roads leave to the same place. We cut east to Bennington Vermont.

In Bennington, we passed the famous women's college. There was a leisurely stop at a Dunkin Donuts for coffee and a muffin. We talked to some riders from Boston headed home after Americade. One was on a 2000 purple/black Nomad just like my old one. I phoned Mom and got her to change my driver selection in the NASCAR pool for today's race. 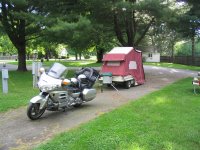 From Bennington, we headed east on 9. This road gets a thumbs up, especially the part east of Wilmington. We arrived in Brattleboro and headed north of town looking for the KOA. This is the absolute best campground I have ever stayed in. It is small but the sites are level and well tended, laid out in semi-circles. The shower and washrooms are spotless and the games room/laundry/TV lounge are excellent. They have TWO WiFi access points. We did laundry and met retired couples from Florida and South Carolina who are wandering in their RV's. Sandy also met a couple from Australia on an eight week tour in a rented unit. I even got to see the end of the NASCAR race on TV. 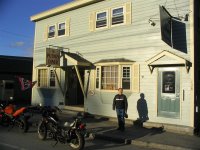 For supper, we went in to Putney Village, just north of here. The Putney Diner is the kind of place you wouldn't look twice at, but it was recommended. Once inside the old building, you could see there was something special. The food was great, the prices low and the service friendly. I even tried a homemade maple walnut pie since I had never seen one before. It was great. I would recommend this place to anyone who is in the area.

We're back now and I am typing this so I can turn in. Tomorrow we will decide where to head as we explore New England for a few more aimless days.
Posted by Jim "Skid" Robinson on 6/11/2006