Today was the first day of summer and the longest day of the year. It started with the local rain clearing out to the northwest just as we got up. The Weather Channel radar showed red and yellow all up along I-80 so, once again, I felt pretty good about detouring south. There were some severe thunderstorm warnings, but no sign in the sky.

We road west to Ottumwa where, after a search, we found a McDonalds for the obligatory McGriddle for Sandy. We got gas and, since it was spitting, we put the suits on loosely. This meant nothing was done up tight but could be while we were riding.

As we continue west on US 34, we rode between storm systems to the north and the south. Near the west side of the state, the clouds dissipated and the SW wind changed to a strong gusting north wind. We stopped in Red Oak for gas and took off the suits under blue skies and 88F temperatures. We dug out the water retaining neckbands that Sherm gave us last year to cool us down.

While at the station in Red Lodge, I noticed the right turn signal bulb on the bike was still lit even though the ignition was off. The trailer wiring harness is isolated from the bike and draws its power directly from the battery. Each circuit is controlled by an electrical switch called a relay run from the bike circuits. The relay had stuck. This happened last year and Bushtec, the hitch manufacturer, sent me a replacement. I sent the bad unit back to them in Tennessee for an autopsy. Well it has now happened to the new unit, which wasn’t easy to install, and it was the same light again. After fooling with it, I pulled the bulb and had to use hand signals for right turns.

South of Council Bluffs, we caught I-29 to the northwest. We followed the Missouri River to Sioux City Iowa where we stopped to consider our plans. There was a nice KOA just over the river on the South Dakota side, but it was early and we decided to run some more miles. On up I-29 we got off at SD 50 and went into a tourist info place to find out what things were like along US 18 since it looked pretty bleak on the map. The nice lady gave us maps and told us where services were. She also warned us about a detour where 18 was closed west of Winner. Lastly, they gave us a DVD promoting the Sturgis Black Hills Motorcycle Rally. It was nice to see the government promoting this even though we won’t be going since we dislike large crowds. 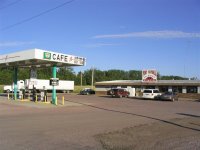 The first part of SD 50 was inhabited but, as we got further out, it got quite empty. It was, however, much prettier than I-90. Finally, after going through a few small towns and changing to SD 46, we got to Picktown. This small town is right above the Fort Randall Dam and must be South Dakota’s version of Dog River Saskatchewan. If you non-Canucks don’t get the reference, this is a Canadian TV series based in a fictional Saskatchewan town. Action is based around a gas bar/café. Note the Fort Randall Bait & Tackle Café adjoining the gas station.

We got a room at the Fort Randall Inn. It’s a nice little place and even has WiFi so I can get this caught up. We went over to Bryndy’s Steakhouse & Lounge for a good supper and then I settled in to do my Blogging.

Tomorrow, we have about 319 miles plus the detour to Custer. I also have looked up the Bushtec number so I can phone them about the relay. It will be good to get in and join the VROC Madhouse Forum for a few days.
Posted by Jim "Skid" Robinson on 6/21/2006